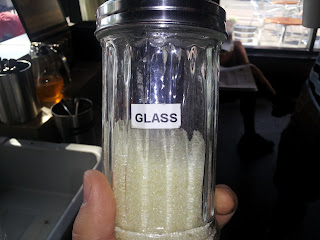 I was about to shake this into my coffee, when my friend Phil stopped me and pointed out what I was about to do. Assuming that's labeled correctly, that would have been a bad latte.

So what was I meeting Phil about? Mostly just to hang out for a bit, actually. But we sometimes discuss the goings on of his company, Lecker Klecker, and specifically, his awesome forthcoming indie opus, King Voxel.

But you feel you must ask: "Mike, isn't Marvin's Mittens your forthcoming indie opus?" Yes. That one is mine (and the rest of the Breakfall team's). King Voxel is Phil's, and I'm doing the music for it, if you'll recall.

Having little to do with any of that (except that I started it while waiting for Phil, and finished it on the bus ride home), here's Waiting for the Cubeman: