I really barely played the game for the last year or two. But when I was playing it, what a game it was. Design, in exquisite detail, your own hero. Decide his or her abilities, pursue comic book plotlines that mixed just the right amount of kitsch and action. I made so many characters, played so many stories... I don't entirely like to think about how many hours I put in. It was a staple of my gaming for many years, and I truly loved that game. 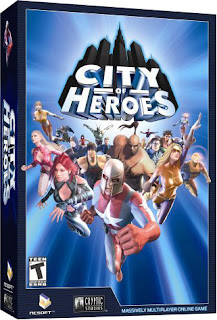 So thanks, Cryptic, NCSoft and Paragon Studios. Thanks for giving me that platform to have so much fun in an awesome virtual world. Thanks for the collection of medieval armour and flora that was the Gnomish Battlegarden. Thanks for the rabbit ears and high tech gadgetry that made Scrappy Trappy Bunny such an absurd, yet effective villain. Thanks for Dustgear, the steampunk gunslinging android, who turned out to be far more deadly that his creator, Dr. Doomtron. The artificer Roland Swift was recreated to try every different powerset I could possibly relate to magic equipment, while Lord Kroog founded the Thaumaturgically Reinforced Offensive Operations Planning Services (TROOPS, for short). I'll never forget the day that TROOPS finally found its way, as an organization, into the hero designation. A series of action heavy missions saw a squad of these dark-magic-infused soldiers shed their status as villains and change alignment by helping heroes thwart some since-forgotten apocalyptic scenario. The details of who they shot that day didn't matter, what mattered was that suddenly I could walk among heroes without having to lob any grenades. And dear old Skeezik Sordido, the dark wizard who, as soon as it became available in an update, elected to drop his mastery of illusion magic in favour of leading a deadly cadre of ninjas. Ninjas! As minions! So good.

It's an inglorious end, I suppose, and terribly sad to know going back isn't even an option, but many happy hours were spent in Paragon City and the Rogue Isles, and I'm certain I'm better friends with a few people because of the time we spent playing this game. Thanks City of Heroes, you'll be missed.

Go like Breakfall on Facebook to stay on top of Marvin's Mittens news! This blog is gonna probably stay a little quiet while Breakfall members ramp up Marvin marketing efforts, but I just posted a rather nice track from the soundtrack on Facebook.

Other music and announcements will resume on mike-ok.com in the new year!