A good tool like a solid, chrome vanadium, 3/4 wrench found in a surplus store on the cheap. Though it came as a package, the estimated post-tax cost of this wrench is around 75 cents. 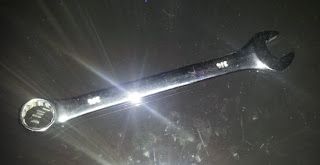 To challenge myself and push the limits of creative sound design, I'm going to see how many and what sorts of interesting musical tracks I can create with just this tool. I want to do something more experimental, and the goal is to avoid using any additional synthesizers or samplers.

Partly, I'm following in the footsteps of one of my favourite electronic musicians, Amon Tobin, who made incredible sonic worlds by chopping up tiny samples of various source sounds (mostly old jazz records to start, but increasingly all sorts of sound in recent years).

Partly, I'm doing it as a passive aggressive counter-argument to people who claim you can't "do anything" with this sample pack or the other (a perspective in music making I find decidedly devoid of creativity).

Mostly, it just struck me during a morning commute that I needed a new personal project, and this popped into my head as something tricky and fun.

So what sorts of sounds can you get, just from a wrench? Just tapping it, flicking it with my fingernail, and throwing it on the car seat next to the microphone, I made these.

Alright, so on their own, those are rather unexciting. But in the wonderful world of digital audio manipulation, those simple sounds, and no others, yielded this range of textural delights.

So there's a track. Is it just noise, or a sublime tautology of profound acoustic beauty? Whether or not its your cup of sonic tea, you have to admit that the world of digital audio is just pretty neato, right?

Welcome to the audio life of the wrench. It will be back shortly.