When I first got a job in game audio, it was to work on Raze's Hell. Not only was I was working on games, which I love, but I was contributing to a dark, satirical third person shooter with a really off the wall sense of humour and violently bizarre aesthetic. Talk about starting with a bang (among other explosive noises)! 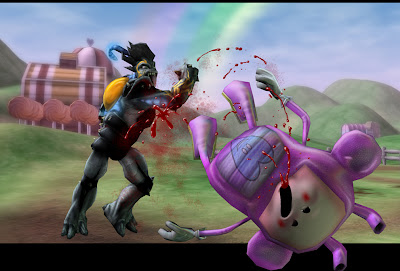 Punching adorable right in the face.

I hadn't done a lot of sound design at this point. I had played a lot of games, and studied Sonic Design at Carleton, but my audio production experience was mostly centred on making music. But there were some great people at Artech who were really into the sound thing, and they had some sounds in already, and had a very solid vision for how the game should sound. This is where I started to see how interesting and creative sound design could be. 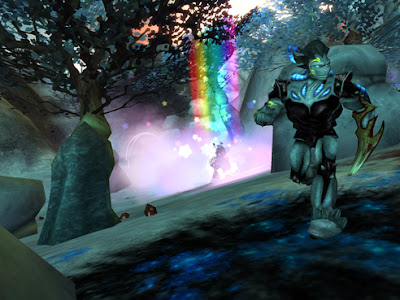 The Kewlett rainbow teleporter was an interesting mixture of electronic sounds and flanged giggles, if I recall...

I desperately begged my bosses to let me do some music, making demos and writing up a (ridiculously formal) proposal (keep in mind I already worked there). Eventually, I was allowed to write all the music, and I'm very proud of it. But what this game will be remembered for is the Kewlett in-game dialogue. 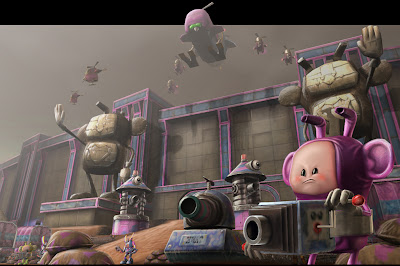 These little buggers were FUN to voice.

The Kewletts are obnoxiously cute and highly militarized, and sound like chipmunks with guns, riding an aggressive cocaine high. The horrible, self-absorbed little monsters were a great pre-established character, and they needed voices. After a lot of testing to figure out the best way to pitch them up and still have them intelligible, I got to work with the AI and sound programmers to figure out how to trigger very contextual lines about what was on the minds of your vicious and cute little opponents. We played other games, read about how Halo did it, and got ambitious.

A lot of fans and critics seemed to really appreciate the Kewlett banter, but I doubt very many people know just how much of it there is in there. I wrote up a list of states, and a script to work from. Then I got a bunch of high school improv buddies into the studio, told them about the characters, and told them to read the lines, and add anything else they could think of.

We wound up with around 6,000 lines of dialogue on that disc. And just over half those lines were read by me personally! People have commented in several forums that they just keep hearing new stuff, and they love it. That's immensely satisfying as the writer, director and actor for that pool of dialogue. I was given a great concept to work with, but I'm very proud that it became a central feature of the game in every almost every review and forum discussion. I haven't got the chance to anything of similar scope since, but I do try to voice strange or adorable creatures whenever I get the chance. 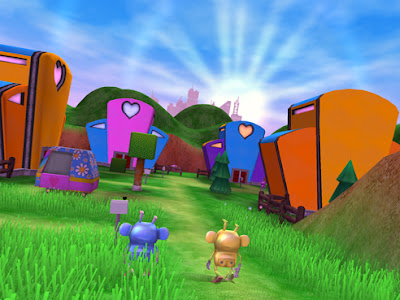 The soundtrack was interesting too. I used some soft synths, samples from hardware and software, electric guitar, some didgeridoo played by a playtester, and singing performed by my lovely wife (at the time girlfriend). It was epic, it was manic, it was a mixture of everything I'd ever wanted to put into a game soundtrack. For educational purposes only, here are some mixes made from game tracks (copyright is owned by the publisher, Majesco).